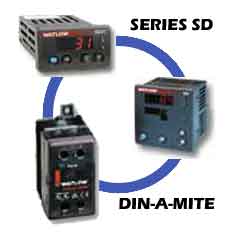 A manufacturer of twin screw extruders was looking for a temperature controller solution capable of heat or heat and cool control for a plastic extruder application. They required DeviceNet™ communications and an indicating display.It was necessary to be able to control multiple variations in the quantity of zones on their equipment. Watlow had recently developed the SERIES SD controller with DeviceNet™ protocol.

Watlow had recently developed the single zone SERIES SD controller with DeviceNet™ capabilities. This controller appeared to be the perfect fit for the extrusion application. With individual zones of control the customer could add or remove controllers as needed. The SERIES SD has the indicating display to show both set point and process value. It has multiple outputs to use for both heat and cool functions. And finally, it is available with the DeviceNet™ protocol.

The original design of the SERIES SD DeviceNet™ functions did not perform exactly in the manner desired for this specific application. Watlow listened to the Voice of the Customer (VOC) and identified there was an opportunity to save the customer cost and inconvenience if the capability requested was added to the SD with DeviceNet™. Watlow worked with the customer to develop custom overlays, preconfigured parameters and firmware to poll the I/O as requested. Watlow provided samples of the DeviceNet™ SERIES SD controllers with the requested changes to test. The customer was pleased with the performance of the SD controller and the modifications made to the DeviceNet™ protocol to satisfy their needs and have been using the Waltow SD controllers since March 2004.

DeviceNet™ is a trademark of the Open DeviceNet Vendors Association