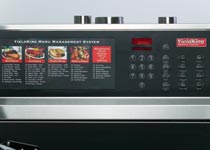 The B.B. Robertson Company needed a new controller for its new YieldKing Oven. The Oven is one of the most versatile ovens manufactured because it is a combination convection oven, smoker, steamer and holding cabinet - all in one unit, with a smart controller.

The oven required a versatile controller that would monitor and control all functions in the unit. The team selected Watlow's new SERIES N7 controller. Watlow supplies most thermal components to B.B. Robertson, including tubular heaters, thermocouples, solid state relays and temperature controllers. Watlow's engineers and programmers created a unique temperature controller for the YieldKing oven.

The main advantage of Watlow's SERIES N7 is its heat/cool capabilities, which monitors the temperature and cools the oven down automatically when it passes the set point temperature. This ability allows the oven to employ OmniVection technology to identify the exact cooking time and temperature for any given product and then engage the precise cooking method from start to finish. The heat/cool capability allows the SERIES N7 to control the oven's five distinct cooking stages and the ability to switch between them including:

1. A high heat searing stage at 425°F to seal in all the natural juices. This fist stage can operate with/without smoke and/or steam depending on the program.

2. A cool down stage keeps delicate proteins from overcooking because the well-insulated oven will not cool down quickly on its own.

3. A slow roast stage with or without the smoker and steamer. This stage creates tenderness in the meat being cooked.

4. A second cool down stage to reduce the temperature to the correct holding temperature. This stage can also be used as a second slow roast cycle if needed to prepare proteins that require multiple steps down in oven temperature like Prime Rib.

5. A holding stage with gentle steam is an ideal way to keep meat moist and tender while maintaining the perfect temperature.

In this flexible oven, the user can smoke ribs with hickory chips and then bake a batch of brownies and have absolutely no transference of smoke flavor. The YieldKing can roast proteins, steam seafood and vegetables, smoke BBQ, and proof and bake breads. Another unique feature is the dripping catch pan that allows the user to capture rich drippings from the meat to make gravies, sauces and stocks. "This Combi-Oven is able to cook and hold and then is almost self cleaning," adds Griggs.

Additional features of Watlow's SERIES N7 include three individual inputs, consisting of one for oven temperature and two for separate meat probes. The unit can also store up to 40 preprogrammed recipes that are accessible through the controller or can run a manual menu as well. The user has the choice whether to run the controller manually or totally automated.

The SERIES N7 can store up to 40 recipes and show the name in a clear, plain text display, which is critical to avoiding mistakes that can lead to expensive food being wasted. The combination of the plain-text display, high processing power and large memory lead the team to add multilingual support with all text prompts displayed in English or Spanish at the touch of a single button.

The SERIES N7's communications software allows the user to upload all parameters in the controller to a PC and then save, download and e-mail. This uploading and downloading of parameters allows the user to standardize and save recipes. This is very important for chains that require the same recipe at all stores to ensure enhanced customer experiences.