A manufacturer requires a heating controller for candy processing. They want one control that will do several functions. The control needs to be easy to setup and use.

The manufacturer needs to heat up their candy to a temperature of 200°F using the "ramp to set point at start" to prevent damage to the candy at start up. Once it reaches 93°C (200°F), two things need to happen:

1. Inform the operator "batch finished" via a pilot light and remain "on" until this batch is removed.
2. Automatically change the set point from 93°C (200°F) to a cooler 76°C (170°F) until this batch is drained, which could be hours later. This prevents the candy from being overcooked.

The 988B-25BD-JARG and DB1C-3027-K200 DIN-A-MITEs®, along with a sanitary RTD probe for direct immersion into the candy was a perfect solution! Our three outputs were able to: 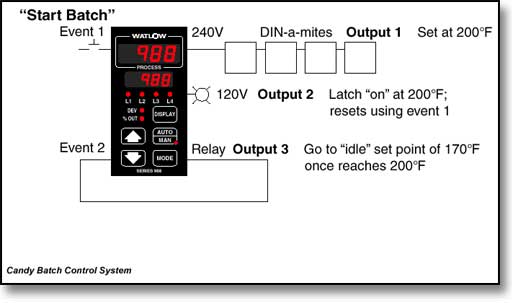