An aerospace manufacturer needs to control air temperature into a low-speed acoustic chamber. The system presently consists of eight each 77kW duct heaters running on 480Vac, which are manually controlled with switches. The customer wants to change to automatic control and have data logging via a computer.

The maximum air temperature will need to be controlled when the new air filtration system is installed down flow from the duct heaters. Testing has shown that the heaters will exceed the maximum temperature on start-up. Heat time needs to be as short as possible. In addition, all eight heaters should be controlled as a single zone. The customer wants to use solid, state power controls as well.

To limit air temperature at the filter, the SERIES 988 is configured for cascade control. One thermocouple is mounted in the duct before the filter and the other is located in the chamber. Previously, an operator stood by the manual controls and watched an indicator to determine how may duct heaters to energize. This new system will eliminate the need for that operator and allow the use of the new filtration system.

EIA/TIA-232 communications on output 4 of the SERIES 988 will allow connections to a computer for data logging. Current transformers with LED indicators will allow operators to tell if any heaters fail. A sail switch in the duct will prevent the heaters from being energized, unless there is an adequate airflow.

Key products were used for this solution: SERIES 988 and QPAC 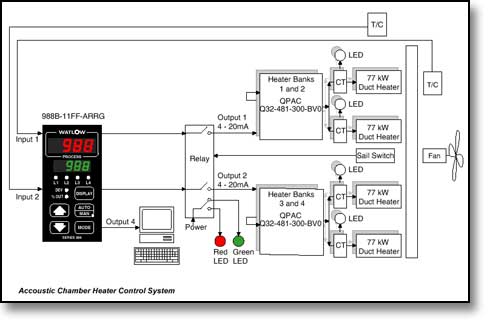