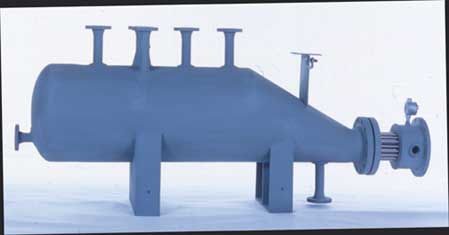 A manufacturer needed to reheat water and convert it to steam downline in their process. They wanted to eliminate emissions and keep costs down, so they chose an electric kettle reboiler to meet these requirements. For this job a number of ASME specifications would have to be met.

Watlow responded with a circulation heater designed in a conical shape with a tapered end.

Because of the outdoor atmosphere, the control panel was designed with a NEMA 4X enclosure. An air conditioner was necessary to protect the panel components from overheating.

The application was successful for the customer due to Watlow's ability to follow the ASME code requirements as well as the customer's lists of requirements. In addition, the customer benefited from the use of an electric, rather than gas, system. The advantages of electricity include better controllability, no emissions and low capital equipment cost.