An aluminum manufacturer wanted to control the process temperature in three zones. They also wanted to perform this control via computer, using a Windows® based software.

One panel, which utilizes one personal computer, must perform control of the three zones. Provisions must be provided to visually monitor the current draw of each heater. Over temperature protection is required.

An interface converter was utilized between the EIA-232 interface to the required EIA-485 interface. The EIA-485 interface allows up to 32 devices to communicate on a bus. The WATLINK™ software is Windows® based and was selected to talk to the controllers. This permits the user to program all three controllers from the PC and download the parameters to the SERIES 988. The DIN-A-MITE units provide precise temperature control, while the ammeters allow the user to visually see the power consumption. The SERIES 92 High Limits are provided as a safety feature to protect the system.

The use of this system has given the customer the ability to control each of the three zones from one PC, as well as have a panel that provides precise temperature, safely and reliably. 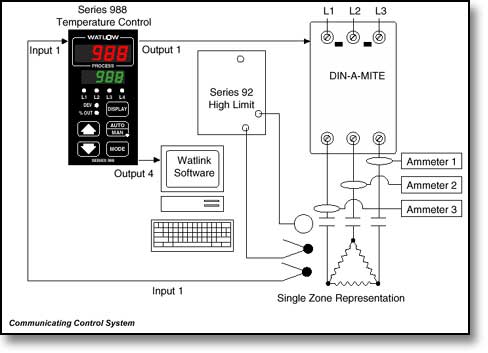