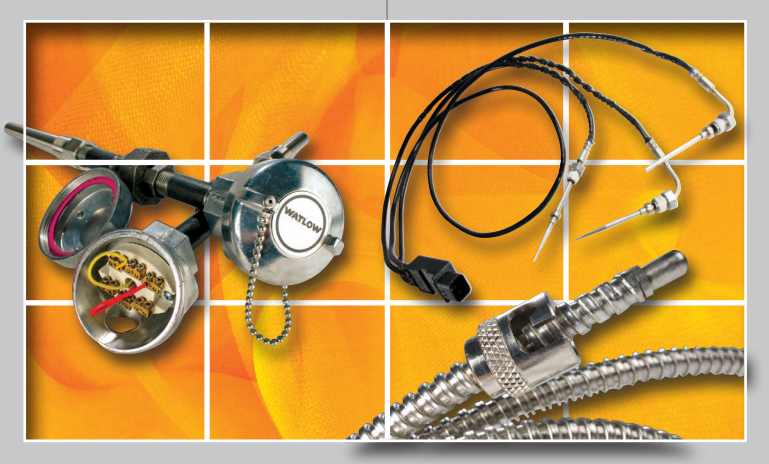 Think about the last heating system you and your team designed. At what point did the team address the need for temperature sensors and how to integrate the devices into the system? If it was toward the end, you are not alone. Often sensors are the forgotten devices when systems are developed. Unfortunately, this approach leads to delays and increased costs as the system often needs to be redesigned.

Integrating sensors into the design and thinking about sensors early in the development process allows you to place the right sensors in the right location while protecting the wires and other components needed for the sensors.

But what type of sensor do you need? How does it connect to the system process – by a controller or programmable logic control? What is the optimal placement of the sensor to get the most accurate, dependable reading? These are important questions when selecting a temperature sensor, and the experts at Watlow are prepared to help you identify the best solution for your unique system.

Thermocouples, RTDs and Thermistors, Oh My!

Sensors come in three common types: Thermocouples, resistance temperature detectors (RTD) and thermistors. Each has specific characteristics, from durability and temperature ranges to accuracy and size, and these qualities define the pros and cons of a particular sensor. Let us take a look at each type.

Thermocouples are a relatively simple design of two dissimilar metals connected and wrapped in compacted ceramic magnesium oxide or another ceramic material. When the sensor is placed in the process, the wires create a small electrical signal or voltage as the temperature changes. While the design is relatively simple, thermocouples require complex electronics in the controller compared to RTDs and thermistors.

The simple design makes thermocouples tough, rugged devices. They can withstand extreme temperatures, vibrations and physical contact. This is best illustrated in an aerospace application. Thermocouples are used to monitor the temperature of exhaust on turbine engines, which means they are capable of handling rapidly changing extreme temperature changes – from freezing temps to thousands of degrees in a short time frame – and the violent thrust of the exhaust.

They are also small, fast and flexible. Some thermocouple sensors are as small as ten-thousandths of an inch in diameter, making them extremely fast. They can be bent into a variety of configurations, providing designers flexibility in packaging.

However, thermocouples are not the most accurate sensors, nor are they as repeatable or stable. Variations in the alloy mixture can change the output of the sensor. While there is tolerance in some industries for these inaccuracies, it may not be as desirable for applications requiring pinpoint accuracy. In addition, thermocouples are prone to drifting, which is the degradation of accuracy over time.

A thermocouple’s accuracy may be plus or minus one or two degrees out of the box. Over time, and especially at higher temperatures, the accuracy can drift to 10 degrees or more. Drifting occurs as the chemistry of the metals changes.

Resistance temperature detectors (RTD) are highly accurate, precise and repeatable sensors because the resistor is made of pure platinum. RTDs are typically used in food and beverage processing, biotech industries, pharmaceutical development, chemical processing and environmental chambers. In some cases, RTDs are used in semiconductor processing.

RTDs do have limitations in how they are packaged. They are rigid devices unable to bend or flex. The one-inch-long element is wound with a small diameter platinum wire and wrapped in a ceramic sheath. The final design resembles a one-inch bulb. The smallest RTD sensors are a 16th of an inch in diameter. While small, it is not nearly as small as a thermocouple.

In addition, the point sensitivity of RTDs adds a layer of complexity. Consider a food processing plant that uses a deep fryer. RTD sensors must be submerged far enough into the medium to avoid stem loss, which is a situation in which the sensor reads partially the environment in which the rest of the sensor is exposed.

With a few exceptions, RTDs have a maximum temperature rating of about 1,200 degrees Fahrenheit. Unlike thermocouples, RTDs do not suffer from drifting unless routinely exposed to temperatures exceeding the designated rating.

Similar to RTDs, thermistors are based on resistance changes. Unlike RTDs, thermistors consist of a slurry of oxides instead of pure platinum. By using blended oxides, manufacturers of thermistors can characterize and create temperature curves for the specific application. Blended materials, in this case, prevent the sensor from a linear temperature increase. Instead, the temperature readout is affected by the resistance, creating a curved progression.

While this can be a challenge for many applications, it means the sensor is designed for a specific application. Generally speaking, thermistors are built for temperatures less than 500 degrees Fahrenheit and are best suited for very small temperature ranges. For example, blood analyzers often use thermistors because the temperature of blood can fluctuate only a tiny amount. Operators of the machine need a highly sensitive sensor that can detect a slight change in temperature very quickly. Thermistors shine in these applications.

These sensors are ideal for heating, ventilation and air conditioning (HVAC) systems, medical applications such as blood or bodily fluid analyzing and the outside temperature readout on a vehicle’s dashboard.

Like RTDs, thermistors are sensitive sensors, unable to withstand much vibration or bending.

What Type of Sensor is Right for my Application?

As you can see, the three types of sensors have wide variability in capabilities and functionality. Selecting the right temperature sensor is dependent on the temperature and the accuracy requirements of the system. Generally, selection is not dictated by the type of heater. Note: One exception is when the sensor is integrated into the heater package. For example, when a sensor is placed inside a cartridge heater, a thermocouple is recommended because of its small diameter, durability and ability to withstand the higher temperatures found inside the heater.

So when selecting a sensor, thermocouples can withstand temperatures up to 4200 degrees Fahrenheit compared to the lower temperatures acceptable for RTDs (up to 1200 degrees) and thermistors (up to 500 degrees). On the other hand, thermistors and RTDs are more accurate than thermocouples. The right tradeoff will be dependent on the requirements of the system.

Where Should a Sensor be Placed?

System requirements once again determine so much for sensors. Finding the correct placement for the sensor is no different.

What is the ideal location? Unfortunately, the sensor cannot reside in the middle of the oven because as food is moved in and out, it could break. Should the sensor tip poke through the wall, or is a longer sensor clamped to the oven wall a better solution? Each answer comes with tradeoffs the system designer must weigh.

Immersion depth is a consideration in other applications, such as the temperature of fluid running through a pipe. In this example, liquid flow rate and outside temperature can influence the reading on the sensor.

If the ambient temperature is cold, but the system has hot fluid running through the pipe, the ambient temperature will draw heat away from the pipe and away from the sensor. If the sensor is not in the right location or if the flow rate is faster or slower in one part of the pipe, the readouts can be very different even though the temperature of the fluid does not change. An error in placement could translate into wrong readings and costly mistakes in the process.

Sensors can operate accurately and efficiently for many years if the environment and use are appropriate for the sensor. As noted above, thermocouples are more rugged and can function when exposed to vibrations and high temperatures. RTDs and thermistors are more sensitive. For each type of sensor, the lifespan can be 20 to 25 years under ideal conditions. In harsh conditions, the lifespan may be three to five years or less.

Premature sensor failures most commonly occur due to exposing the sensor to temperatures that exceed the maximum rating. When the sensor is exposed to temperatures greater than its rating, it degrades and its lifespan is shortened. Another common cause of sensor failure is moisture ingress. All sensors are susceptible to moisture if not sealed properly, especially sensors operating in humid environments. When moisture penetrates the sensor, the insulation resistance breaks down and it shorts out.

Monitoring and proactively replacing sensors prone to harsh conditions can be advantageous. An unexpected sensor failure can cause downtime, which results in lost productivity. This costs your business time and money. Replacing sensors on a predetermined schedule allows your team to preplan downtime and minimize lost production.

Sensor failures do lead to safety concerns. As a result, many systems are designed with redundant and high-limit sensors to shut down a system if the temperature increases to unsafe levels. Let us go back to the food preparation facility and the deep fryer. If the RTD sensor fails while the element is heating, the oil temperature will continue to rise to unsafe levels because the switch will not receive the information it needs to turn off the heating element. At some point, the oil would ignite and start a fire.

In a runaway situation like this, the high-limit sensor will shut down the entire system when the temperature exceeds a certain level. Note: In this example, there would likely be other safety measures in place, such as monitoring the oil level.

In some cases, system designers will build in extra sensors. When one fails, the operator flips a switch to activate the other sensor. This approach is often used in applications in which the cost of installation is expensive, the system is operated in a remote location or it is a significant process such as with refineries. In these situations, the system is created so the operator does not have to think about replacing sensors or scheduling a field tech to replace the failed device.

Selecting and implementing the right sensor is not only a safety concern, but can have a real impact on the efficiency and productivity of your process and, ultimately, revenue. In the semiconductor industry, a tenth of a degree in lost accuracy could result in a couple tenths of a percent or more in lost yield. In the semiconductor sector, that translates into hundreds of thousands of dollars.

In other applications, considering sensors too late in the design phase can result in a poor location of the sensor, causing system issues or the need to redesign the system completely. Not thinking about a $30 sensor today could lead to hundreds of thousands of dollars in redesign costs later.

Contact a Watlow representative today, and our team will help you identify the right sensor for your application. Our sensor experts are prepared to assist your team in implementing the best solution using industry best practices to get the best results from your sensors and system.