Thermal System Integration: The Example of RMA PLUS™


It is rare these days for a manufacturer or engineering firm to buy a single part such as a heater. We are seeing far more customers today interested in buying a complete thermal solution…or consulting with a Watlow engineer to put one together. This often means integrating a large number of thermal system components—heaters, sensors, controllers, data loggers and more—some of which might already be part of an existing system.


Which means that the true challenge that comes with these systems is integration.

Getting Different Devices from Different Generations to Speak To Each Other

One of the biggest barriers to true thermal system integration is the fact that systems rarely “come together” all at once. It is much more common for a system to evolve over time as technology advances: Equipment gets upgraded, sensors are added and new computers are added to the network to log and present data.


If this evolution happens over the course of several years, the devices in question might be from different generations and that makes connectivity difficult. For example, an older controller might require RS-485 connections (what we call interfaces), while a modern PC used for data visualization needs to connect with a USB or Ethernet. Those different interfaces also mean different protocols and a massive headache when it comes to setup.


That lack of compatibility is unfortunate; just because a device is not easily compatible with other devices in the system does not mean that it, or the protocols it can use to connect, are not sufficient to get the job done.


Does this mean that engineers need to choose between a complete upgrade of their systems or giving up the dream of integration altogether? Not quite. The kind of connectivity required can be achieved with the right connectors. We will use our own RMA PLUS™ as an example.


System Integration with RMA PLUS

RMA PLUS is designed to connect to modern and legacy Watlow® and third-party systems, giving you installation flexibility that works even with systems that were not formerly compatible. As you can see in this photo, the RMA PLUS can support a wide variety of connections: 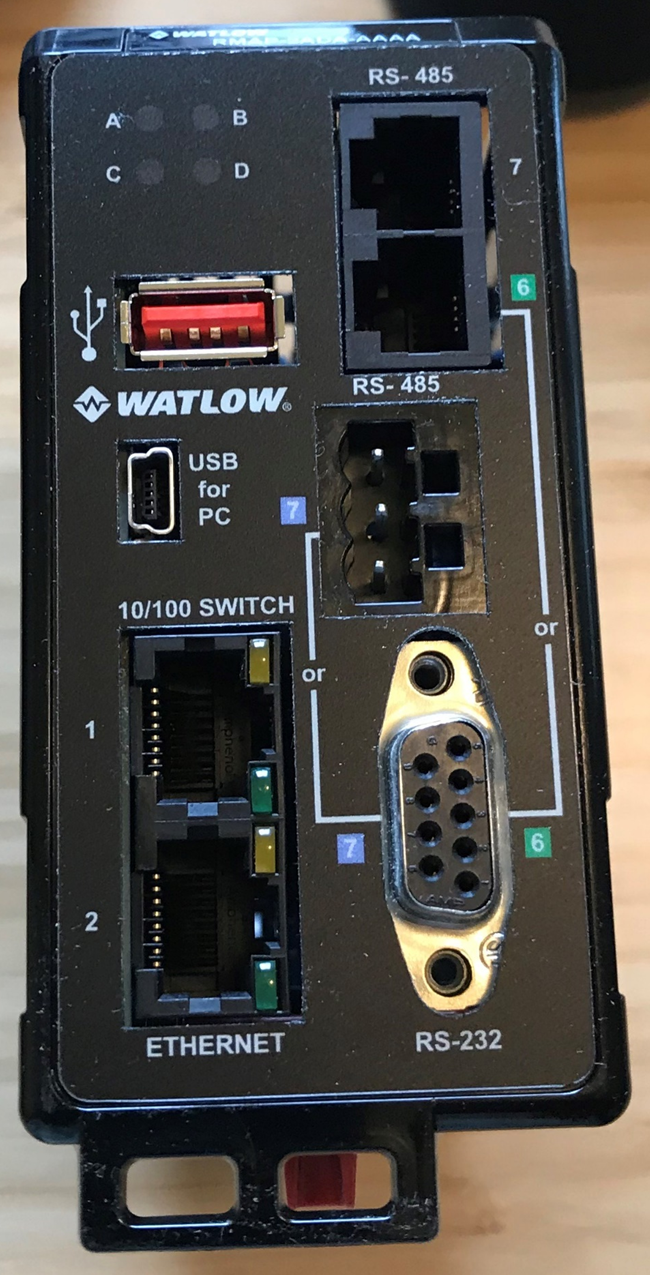 See all those ports? They can enable up to three Modbus® TCP sessions, three standard bus over Ethernet sessions and one standard bus over USB session, all within a single device. RMA PLUS can also serve as a gateway between Modbus® TCP and Modbus® RTU systems, providing connectivity even if your systems are not based on a proprietary Watlow standard. (In other words, it can allow access to third-party and legacy devices.)

Let’s take a look at some of the protocols (and connections) in turn. 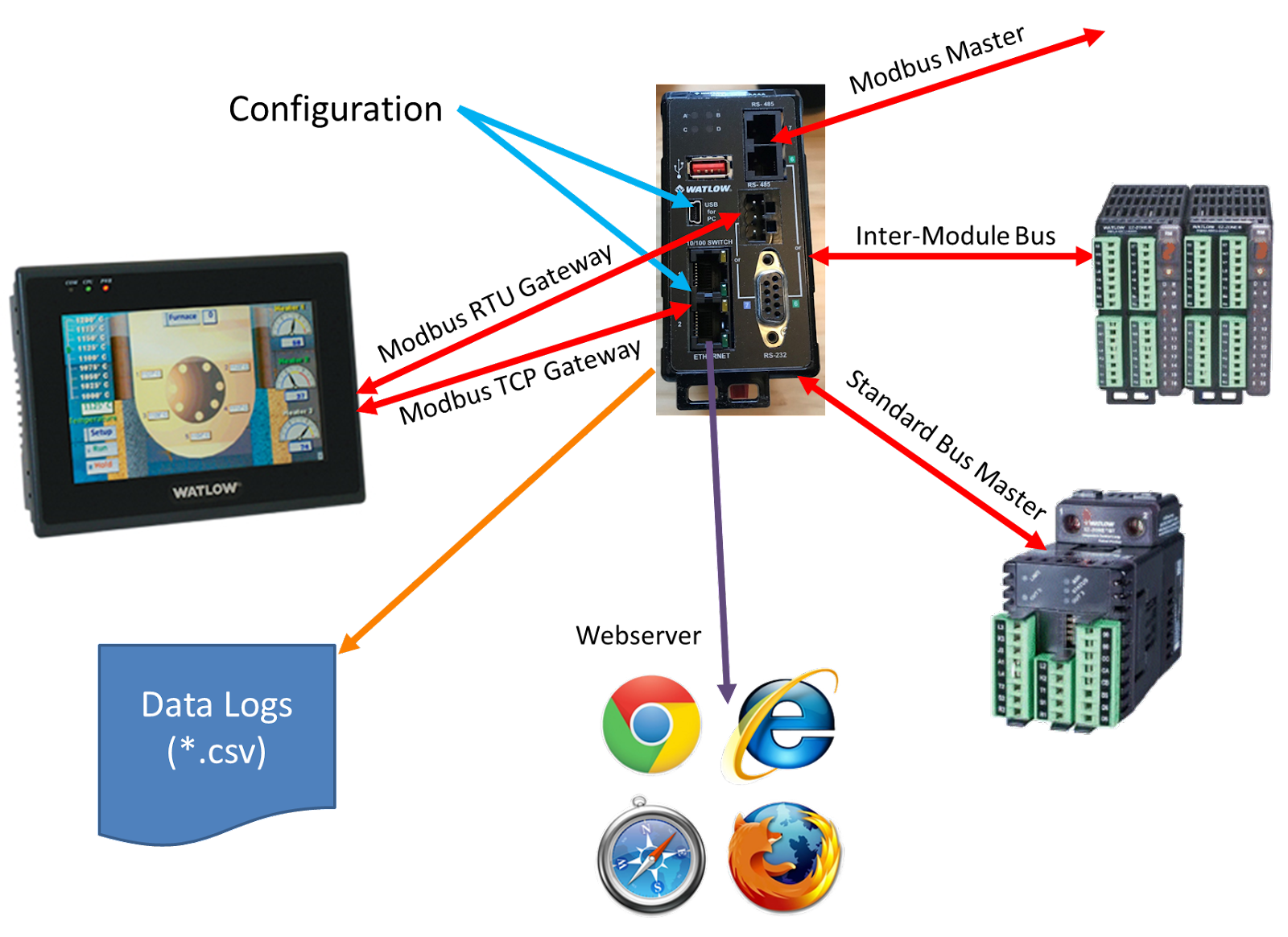 Modbus® is a family of communications protocols first developed by Modicon in 1979. It was designed to be agnostic to the physical layer on which it ran. So, while it was originally used on RS-232 systems, it was later used on RS-485 to support communications to multiple devices.

However, both of those protocols are highly outdated today. Modbus® TCP is an updated version of Modbus® that runs over Ethernet, achieving faster speeds and lower costs than RS-232- or RS-485-based systems.

Because it is an older protocol running over newer equipment, Modbus® TCP allows for a best-of-both-worlds scenario where equipment that uses Modbus® will not need significant upgrading in order to conform to the new standards. This allows a certain amount of retrofitting of existing equipment.

MQTT for Internet of Things (IoT)

MQTT (formerly Message Queuing Telemetry Transport) is a network protocol that is quickly becoming one of the most used protocols for the Internet of Things. While that usage would imply that it is a newer protocol, it was developed back in 1999 to monitor oil pipelines via a satellite link. At the time, communication via satellite was extremely expensive, so it was designed with a special set of concerns in mind. Watlow’s RMA PLUS provides a workaround for networks that were not originally built with the standard in mind. Because it can serve as an MQTT client, it can collect device data and retransmit it in MQTT creating new opportunities for building your network.

Despite debuting in 1983, RS-485 (now TIA/EIA 485-A) is still a solid communication option, with speeds of up to 100 Kbps and distances of up to 1200 meters with up to 32 receivers on a line. Plus, RS-485 uses differential signaling, making it virtually immune to noise—an advantage in many manufacturing environments.

Of course, Ethernet-based communication is both far faster and cheaper to install. But if you find yourself with both systems in your plant, or want to use a modern controller that does not support RS-485, you may need a converter..

If you find yourself in a situation where different devices on your network use different protocols, the headaches of using multiple converters and servers to keep everything in check can quickly stack up. Watlow’s RMA PLUS circumvents these issues by supporting a variety of protocols in just one device.

In addition to legacy devices, RMA PLUS also supports Watlow’s powerful EZ-ZONE® RM family of multi-purpose temperature controllers, as well as POWERGLIDE® controllers. This means that a thermal system can be built that has all the tools and conveniences of a modern controller (or controllers) while still maintaining the utmost connectivity.

While the variety of connections RMA PLUS supplies (and the number of communication protocols it supports) make it a versatile tool, arguably the largest benefit is its ability to log the information from these disparate systems despite the variety in how they communicate. That leads to lower installation costs and mitigation of costly upgrades such as Ethernet switches for all your legacy devices.

In short, integrating devices in a thermal system should not require all new devices. Sometimes, having the appropriate connectors is enough.

For details about and specifications for the RMA PLUS, visit our RMA PLUS product page.


For more about the basics of protocols, interfaces, and services, see Process Controller Communication Protocols.


Have additional questions? Send them to us.

RMA PLUS
Back to top