A Guide to Electrical Noise 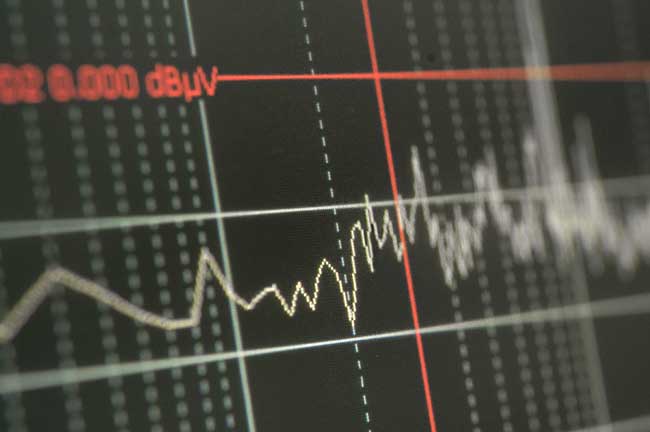 What is electrical noise?

Electrical noise occurs when electrical signals produce undesirable effects in the electronic circuits of the control system. The term “electrical noise” originated with AM radios when the extraneous “noise” heard in the speaker was caused by lightning or other sources of electrical arcing.

Electrical noise and its effects on controllers are very difficult to define, let alone give exact rules on how to prevent. Noise sensitivity is a factor in more recent electronic controller designs. However, the majority of noise problems stem from crude wiring practices and techniques that allow “coupling” or the transfer of electrical noise into the control circuit.

When is it a problem?

The problems resulting from an electrically noisy environment are difficult to predict. One common symptom is an erratic system, with no evidence of a problem appearing consistently. Even worse, the system may exhibit several different symptoms such as fluctuating digital indicators, blanked digital indicators, control instability about set point and outputs turning on or off unexpectedly. Another “red flag” caused by electrical noise is when high or low limits trip with no limit fault condition.

Why is electrical noise sensitivity a problem?

How accurately a controller can differentiate between desired system signals and electrical noise is a good indicator of its sensitivity to noise. In general, high power controllers, such as mechanical relays or mercury displacement relays, have low noise sensitivity. However, power controllers that use electronic logic, especially those using integrated circuits, are more sensitive to noise.

The development of all electronic, solid-state controllers has improved the accuracy of control and expanded their capabilities. These controllers are more complex and operate at very low power levels, which makes electrical noise more likely to affect them.

Where does electrical noise come from?

Our industrial world is full of equipment capable of generating many types of electrical noise. A typical noise source is any piece of equipment that can cause or produce very rapid or large amplitude changes in voltage or current when turned on and off.

Noise could also be introduced if the control circuit includes the option of a mechanical relay output and is used to switch high-load currents over two or three amps. This presents a significant source for noise, including inductive noise from the coil and contact arcing, depending on how much power is brought inside the controller.

How does electrical noise get in?

The control circuitry must be considered in terms of the total system in an electrically noisy environment. The sensor input and power output lines, as well as the power source line, all have the potential to couple or link the control circuit to a noise source.

Depending on the type of electrical noise and its intensity, noise can be coupled to other equipment by one of the following four methods:

Common impedance coupling occurs when two circuits share a common conductor or impedances (even common power sources). This type of coupling often occurs in installations that have a long common neutral or ground wire. An example would be five relay contacts operating five separate solenoids where the switching runs dependently. The return lines from all the solenoids are connected together and run back to the power source with one conductor.

This example of impedance coupling has a tendency to induce noise in circuits that do not have noise, or to amplify the noise from one or more of the circuits sharing the common line. The best way to prevent this type of coupling is to eliminate the common line and use independent leads for each return circuit.

Another noise problem associated with the common impedance coupling is a ground loop. Ground loops occur when multiple paths exist for ground currents. Not only should the solenoid return lines be run as independent leads to the same electrical potential point, but they should also be terminated at the same physical point.

In the same manner, safety ground lines should be returned to the same electrical and physical point. Safety ground (chassis ground) should never carry return currents.

Magnetic (inductive) coupling generally appears where there are wires running parallel or in close vicinity to each other. This happens when the wires from several different circuits are bundled together in order to make the system wiring appear neat. However, without proper wire separation and shielding, magnetic coupling will introduce severe noise problems into sensitive (low voltage level) circuits.

The best way to eliminate magnetic (inductive) coupling is to run leads from separate circuits in separate bundles, taking special care to keep ac (high voltage level) wires separated from dc (low voltage level) wires. If it is at all possible, twisted pair leads and shielding cables (with termination of shield at the controller end only) should be used to reduce magnetic coupling of noise.

Electrostatic (capacitive) coupling appears where wires are running parallel with each other, similar to magnetic coupling. That is where the similarities end. Electrostatic, or capacitive, coupling is a function of the distance the wires run parallel to each other, the distance between the wires and wire diameter. The most effective way of reducing electrostatic (capacitive) coupling is to properly shield the wire runs. Again, separation of wires carrying ac (high voltage level) and those carrying dc (low voltage level) signals will effectively reduce the noise in sensitive circuits.

Electromagnetic (radiation) coupling occurs when the control circuit is very close to a high energy source that is capable of magnetic or electrostatic induction of a voltage. Common sources of such radiation are TV or radio broadcasting towers.

In industrial applications it is not unusual for radio frequency interference to be coupled into sensitive measurement or communications circuits when wiring is near RFI sources such as power contactors. Other potential sources of RFI include mechanical relays experiencing electrical arcs when switching, SCR power controllers when operated with the phase angle firing method, motors and many more. It is also difficult to eliminate if present, because shielding must be 100 percent complete.

Note: Special attention should be given to the ac power line because it is a source of unusual types of noise-related problems in control circuits. Phenomena such as unbalanced power lines, brownouts, power surges, lightning and other “dirty” input power can cause the ac power supply line to fluctuate and momentarily drop below the operating specifications for the ac input to the control circuitry.

When the type of noise on the ac supply line can be identified as purely electrical noise and it does not cause the line voltage level to drop, line filtering devices can be purchased to take care of the problems. However, if power surges, brown-outs, inadequate wire size, etc., are causing the ac line voltage to drop below the levels recommended by the control circuit manufacturer, the only solution is to correct the wiring size or the voltage distribution.