The Benefits of Cascade Control

Industrial heating processes are managed by power and temperature controllers and sensors. These components operate in a harmonious environment to complete the thermal cycling of a process or product. In most cases, this cycling is controlled by a single-loop controller. However, in special cases, the process environment reacts much slower than the heating or cooling device, which can lead to poor application performance. If the system is allowed to run in rapid or frequent cycling modes, diminished heater life, damage or system failure can result.

One solution with respect to heating would be to decrease the watt density, which is typically measured in watts per square inch (W/in²) of the heater’s surface area. This would bring the reaction times of the heater and the overall system closer together. However, if heating products are already installed in an application, this can result in additional cost and downtime, due to retrofitting. A better solution would be to use a control method known as cascade control.

Cascade control involves the use of two discrete control loops. The first control loop provides the set point for the second proportional integral derivative (PID) control loop. This system is designed to provide improved response to non-linear gains and disturbances in the heating systems.

Before getting to how a cascade system is configured, let us look at a single loop of control in an application with a long lag time. In the theoretical application (Figure 1), the heater is immersed in an oil bath, while the sensor is in the material or product being processed.

Due to the long lag time between heat energy entering the system and the sensor measuring the change of temperature, the oil surrounding the heater has the potential of degrading to the point of burning or “coking” around the heater elements. This will cause premature failure of those elements due to extremely high wire temperature. 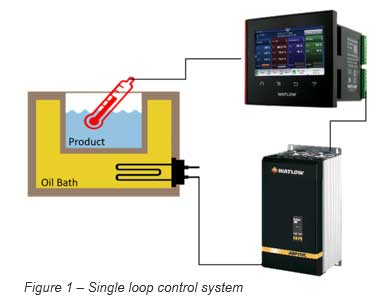 One solution is to design in an over-temperature limit system that uses a second sensor attached to the heater elements and open a contactor upstream of the power switching device. However, this will cause operators to constantly reset such a device once the limit value is reached.

The best solution for this application is a cascade control system (Figure 2). This watches over the temperature of the oil as well as the product to control the heater to reach the desired project temperature. 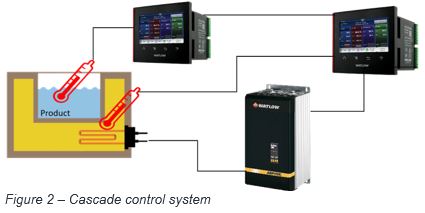 With a cascade control system, there are two loops of control; the outer or primary loop uses the product sensor. This is the loop the customer is most concerned with, as it refers to their product. The inner, or secondary loop, uses the sensor attached to the heater and runs the second PID loop to keep the heater below a specified value. The primary PID calculates a heat (or cool) duty cycle that is fed into the secondary loop and used as a set point for the heater elements.

As an example, if the customer’s product is required to be at a temperature of 500°F, but is currently at 100°F, the primary loop will request 100% duty cycle depending on the PID values. This duty cycle will be used by the secondary loop, along with the correct scaling factor, as the set point.

Watlow’s F4T process controller is equipped with five sets of PID values making it an excellent PID controller. However, when the application requires, there is also a cascade control loop allowing for simple and quick configuration of this control method.

Cascade controls can solve loop problems. However, the following conditions have to be satisfied:

Secondary loop must have influence over the primary loop

For the cascade control system to work, the inner loop has to influence the outer loop repeatedly. This is because the primary loop has no mechanism to influence itself.

Secondary loop must work faster than the primary loop

A faster inner loop can respond more quickly to disturbances than the outer loop. Therefore, it reduces the severity of disturbances and limits variability that would affect the heating process.

In loops where the cascade architecture is well deployed, there is an effective response to disturbances. The inner loop is both faster than the outer loop and closer to the source of the disturbance. This allows for a quicker correction of upsets in the process.

Design engineers can tune the outer loop for a steadier control. The inner loop makes coarse adjustments, leaving the outer loop as the only option for fine-tuning. Watlow’s F4T process controller is one of the best PID controllers that you can fine-tune to limit process variability. It has high amperage power control and enhanced control options that improve the reliability of the cascade control.