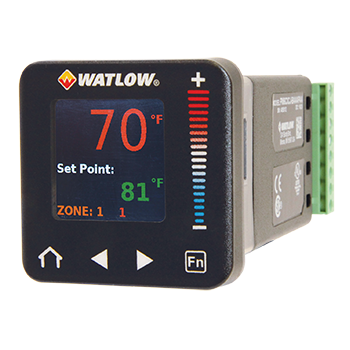 As computational technology has advanced, the role of the ever-dependable Proportional Integral Derivative (PID) controller has come into question. Processes have advanced and become more demanding, leading to the adoption of emerging solutions.

While those advancements will continue to develop, and new features will lead to improved efficiency, PID controllers still have a place in industrial applications. For simple control solutions, PID controllers can be an effective, inexpensive solution.

What are PID Controllers?

PID controllers run constant calculations to determine an error value and the difference between the desired set point and a process variable. The PID controller determines the corrective course based on the proportional, integral and derivative – PID – terms. These devices are sometimes known as three-term controllers.

Modern PID technology has been around for nearly 100 years. Russian-American engineer Nicolas Minorsky developed the formal control law, now known as PID, in 1922. It was a popular solution for many years because a PID controller can be implemented with analog circuits. In the 1980s as computational capabilities increased, PID was a very popular solution because it did not need a lot of resources to run correctly.

If your application requires maintaining temperature or pressure, a PID loop is likely an appropriate solution. However, the PID controller may not be suitable for the startup and shut down stages of the process. Understanding the full scope of the system is crucial to knowing if a PID controller is right for your setup.

The Right Solution in Some Situations

There are pros and cons to everything, including PID controllers. Use cases for PID controllers are circumstantial. Consider a minivan and a sports car. Both vehicles will transport people, but the sports car is not going to help a family of seven. Similarly, PID controllers do not fit every situation, but they still have a place in various situations.

If your application requires maintaining temperature or pressure, a PID loop is likely an appropriate solution. However, the PID controller may not be suitable for the startup and shut down stages of the process. Understanding the full scope of the system is crucial to knowing if a PID controller is right for your setup.

PID controllers have a loyal following for a variety of reasons. First, PID is relatively simple to understand, and for many applications, it is effective. Humans find comfort in understanding what they are using in an expensive process, and often this is enough to continue using those reliable solutions.

However, advancements in controllers can create efficiencies in a process. They may save time by reducing downtime, which increases production, reducing fuel consumption that saves money or any number of benefits.

Think about an oven used to make pizza. That oven needs to be at 400 degrees Fahrenheit  to cook a pizza in 10 minutes. If a home cook checks the pizza too early, heat is lost, and it takes an extra minute or two to cook the pizza. Those one to two minutes do not really have an impact on the home cook’s day. However, if that home cook is making 50 pizzas and each pizza takes an extra two minutes, it adds almost two hours to the project.

While this example is not an industrial situation, it illustrates how technological improvements can reduce the number of person-hours needed to complete a task and reduce the amount of fuel necessary to produce an item. Emerging technologies are designed to return the setup to the ideal set point faster while minimizing overshooting the set point. Ultimately, with even marginal improvements in the efficiency of a process, companies can save time and money.

In some instances, using add-ons or multiple PIDs achieves new results. For example:

Model Predictive Controller (MPC): This controller coordinates inputs and outputs to the system to make highly effective control decisions. In addition, MPCs have a prediction horizon, in which it anticipates what will happen within the system based on inputs. While traditional PID controllers are one-size-fits-all solutions, an MPC is tailored to the system in which it operates.

Cascade Controller: In this situation, one PID controller applies calculations for a set point. The output is a varying set point to another PID control loop.

Override Controller: This solution involves two PID controllers calculating separate process variables and a switch to select the controller output. The switch determines which PID controller to follow based on a set condition, such as the smallest or largest output.

As you can see, you can pair up PIDs in different ways and shapes to achieve different outcomes. While these setups are a little more complex than a single PID, with technological advancements and computer application development, these solutions can lead to marginal improvements that give your company an advantage over the competition.

When considering a PID controller for your system, here are a couple of questions you should ask yourself.

Is my Process Innately Stable?

What is the Process, and Does it Create Additional Considerations?

Consider a heating system in which two chemicals are mixed. In this application, the chemicals need to be at a particular temperature to mix properly. However, when these two chemicals are combined, an exothermic reaction occurs, generating energy. A traditional PID controller would not be effective in this situation because it would not be able to adjust for the additional heat.

Watlow® can Help you Evaluate and Select Controllers for Your System

If you are assessing controllers in your system, you understand the process of the system. It is equally important to know how the controller is going to respond in the application. Do you need it to react or respond? Do you need a controller to provide a prediction? Do you need notice before trouble arises within the system?

At Watlow®, our experts walk you through these questions and more to help optimize your solution and achieve the desired goals. By working with a Watlow representative, you can focus on your process while we target the thermal aspects. Contact a Watlow expert today to begin evaluating and selecting the right solution for your system.